Organic food and farming – what and why?

Organic farming was born as a consumer and farmer driven movement in the early 20th century as a counter reaction to increasingly industrialized and chemical agriculture. Organic farming was developed as a farming and production method whereby healthy food is produced for people in a sustainable way.

Since then organics has been defined increasingly in detail on national, regional and international levels. IFOAM was founded in 1972 to develop cooperation between the various organic standard setters in different countries and has developed the IFOAM Basic Standard as the global referance point for organic standards. IFOAM was preceded by private organic standards and certification schemes in several European countries, most notably Germany, the UK and France.  Still organisations like Demeter in Germany and Soil Association in the UK are important players in the organic market having their own private standards.

On the legislative side the EU was the first to define organic farming by law. Since 1991 we have had the EU organic regulation (now Reg 834/2007). In adition to European organic standards the USA has the National Organic Program implemented since 2002 and Japan has JAS since 2001. More countries are joining or have joined the ranks including China, Korea, India and Brazil. 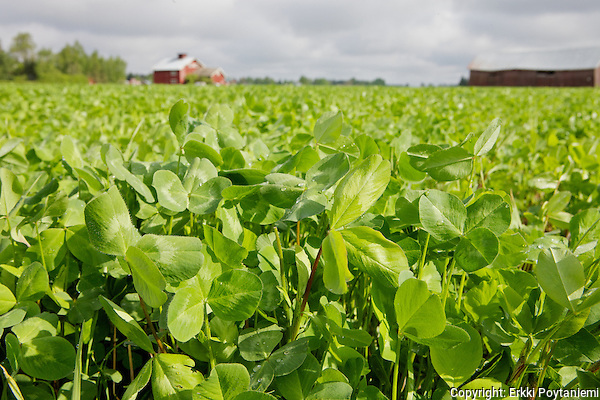 Red clover is the key to an organic crop rotation in Nordic conditions.

According to IFOAM Organic agriculture is based on:

Each principle is articulated through a statement followed by an explanation. The principles are to be used as a whole. They are composed as ethical principles to inspire action.

For a business to go organic there is the obvious reason of jointing a growing market: the organic market is growing faster than almost any other food sector. Historically the year-on-year growth has been in average 10% for decades and the global market is set to reach 100 M€ soon. The main values that drive the organic market are

These drivers are only getting stronger with citizens and consumers getting increasingly conscious of the problems we are facing as humankind.

That brings us to the other reason. As businesses we need to act responsibly and develop our activities to be more and more sustainable from an environmental and social perspective. For us going organic is an important parti of that development.

Please feel free to contact us for any further information.